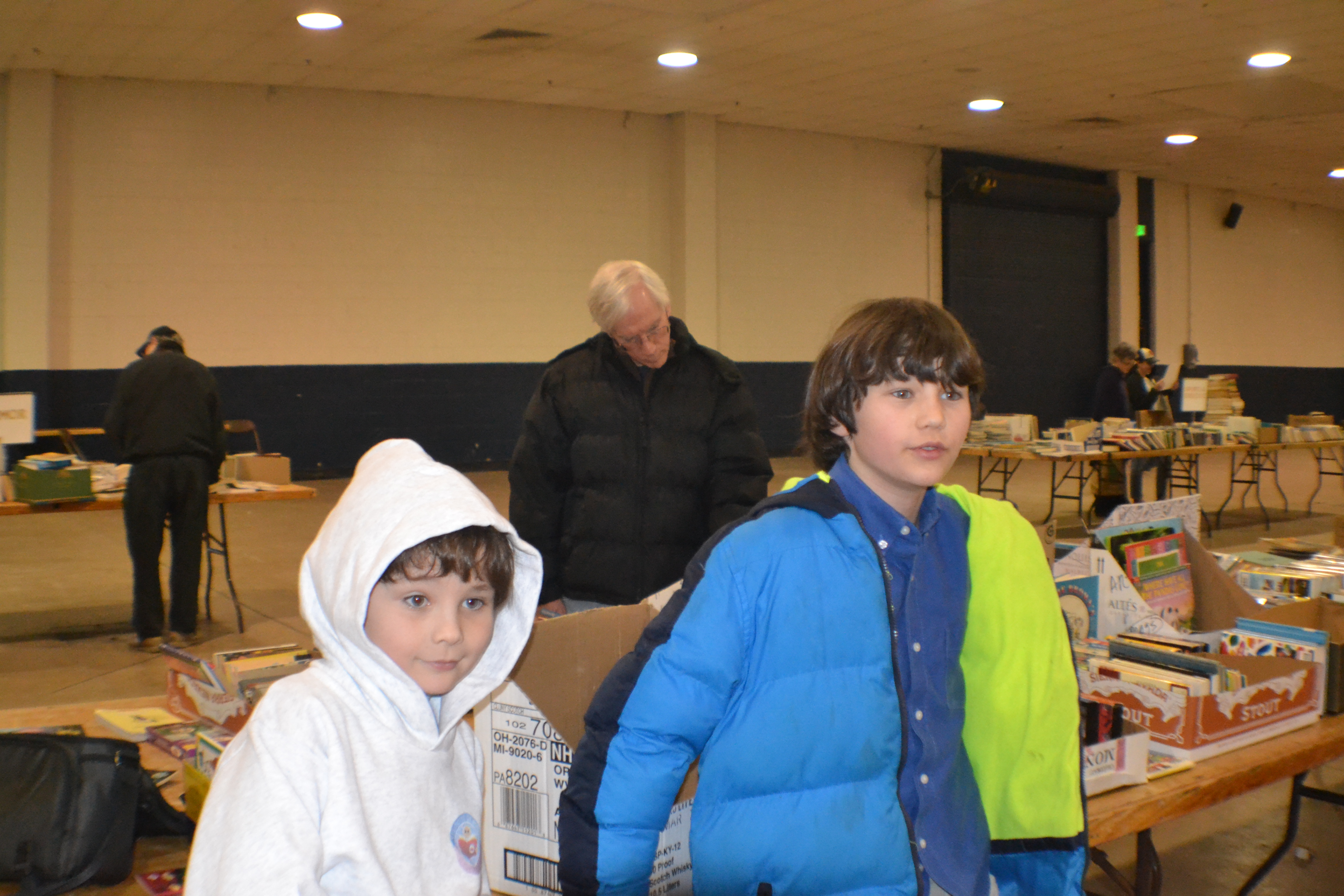 The four elementary school kids found rolling the dollies their task of choice.  They are great at it.  Heather's daughter  informs, Carolyn's husband,  Jack Thompson that he needs to stop using partial boxes to pack the materials.  Only full boxes are permitted.  Those of you who know Heather's daughter, can visualize this.

Jack explains that there are only partial boxes left.  Heather's daughter said something to the effect that that was no excuse and implied that she expected him to find a solution.  Obviously, the COO of her mother's company did not have rank in the volunteer world.

There are about 200 boxes of books left in bits of boxes we used to hold them. Again, Heather suggests that we stage the remaining boxes, so that they are easier to retrieve the following day.

8:00am the following day, we decide that it may be easier to rent storage space for the massive amount of items donated. The storage unit is on the second floor.  We don't find this an advantage to taking  space in Carolyn's real estate office.

En route to Carolyn's office, the U-Haul truck stall out 5 times.  The battery is dying.  The transmission which was slipping the day prior is getting worse.   We make it to Carolyn's office.  We start unloading the truck.  In need of getting a second truck, Jack Thompson comes to the rescue and drives us to the U-Haul to pick up another truck.

At Carolyn's office, Carolyn meets a manager from Office Movers.  The manager is directing a move in an adjacent office suite.  She says that she's moved many libraries and often asked by the libraries where they can donate books. Carolyn hands her a card.

We arrive at MD Fairgrounds to pick up the remaining books.  Time is ticking and kids need to be picked up from school.

Thankfully, Robert, an employee from MD Fairgrounds agrees to help us load the truck, while waiting for his boss to arrive.  After a brief converstation, Robert explains that he could use the books for his church.

We load up material which the prisoners,  specifically expressed a need for (dictionaries and other reference materials, as well as poetry and classic content).

I'd just received an email from Ruth Mewborn, Librarian for MD prison system, stating that she can take hard back books.  This is great timing, as I wouldn't have loaded as many reference materials as they needed.

We say good-bye to our new friend Robert and arrive at the drop-off site for the prison system:
Department of Labor, Licensing and Regulations
1100 N. Eutaw Street
Room 116
Baltimore, Maryland 21201

As we are unloading the 20  dollies full of boxes, a man jumps in to help.  He has a Goodwill work-shirt on.  We are unclear as to whether he is a volunteer or a worker.  We are thankful for his help.

Thankful, we return around 5:00pm.

Today, we unload the remainder of the books on the broken truck.

Then we go to Chevy Chase to pick up books from a home which is about to go on the market.

The tip about the books came from a friend who Carolyn met while trying to help Habitat for Humanity with their marketing.

Many thanks to the numerous volunteers who made this possible.  Together we make a difference!